Blocks of Verdana text explode everywhere. I run for cover, but nothing can save from the keys. They hunt you by the silence when you hold your fingers really still. They come for you and they force you to type, type, type, until your joints burn and the pain cream sizzles on your skin, just a useless salve. 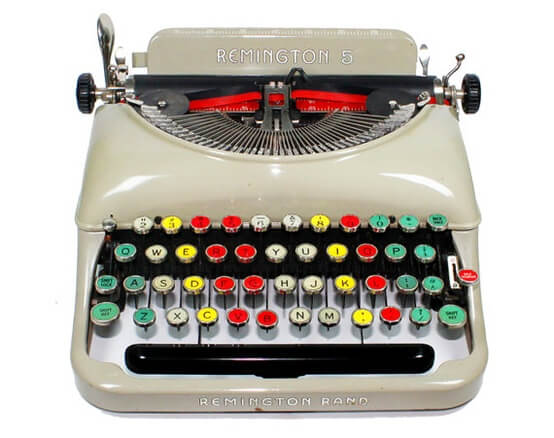 This Remington will let you type the greatest anything in the world, you just need to feed it pain, blood and the meat from your finger tips.

That’s what day-job has been for the past few weeks, while I hear from my orthopedist on what’s the situation with my fingers. I imagine I’ll need another sick leave, but I can’t say for certain the outcome will be. What I know is that I’ll suffer for my writing until I graduate from university. A thing I want to try is acupuncture and find alternative solutions to alleviate the pain. Otherwise, earning money will prove to be a lot more challenging than I’d want it to be, considering I write for a living.

Project-wise, I have engaged with a revision of “The Girl with One Eye”, one of the short stories to marinate. The rough draft has its strong moments, but I have quite the work ahead of me. Then there are the projects that have currently entered the Thunderdome, though I’m not quite sure of the outcome.

One of the projects I want to undertake is “Body of Lightning and Thunder”, which is the type of epic science fantasy weird story I have the desire to read, but haven’t found. Also, the remnants of the first novel I ever wrote has come to me, because I have big plans for that character and the potential to have a kick-ass fucked-up urban fantasy lesbian is tempting. Then there’s multiple world jumping project that has been inspired by my sister I wouldn’t mind getting into.

On the other hand, I have been preparing things for the blog, at a much slower pace, granted, but I have a jam-packed week for you readers.

That’s this week’s update. Come by next week. Hopefully, I will have an update set up.