Thoughts: Sexuality and Gender in “The Alchemist of Souls” by Anne Lyle

I made Anne Lyle’s acquaintance at EasterCon in 2011 and thought her a fun, brilliant lady with an interesting concept for her debut novel, which at the time neared its publication date. Though I had The Alchemist of Souls on my radar for quite some time, I only had the chance to read my copy this January. Boy, am I sour for the delay, because the book takes you on a risky adventure, where everyone has his own agenda. Here’s the official blurb in case you want to know about the plot, because I, sure as hell, won’t talk about the story.

“When Tudor explorers returned from the New World, they brought back a name out of half-forgotten Viking legend: skraylings. Red-sailed ships followed in the explorers’ wake, bringing Native American goods—and a skrayling ambassador—to London. But what do these seemingly magical beings really want in Elizabeth I’s capital? Mal Catlyn, a down-at-heel swordsman, is seconded to the ambassador’s bodyguard, but assassination attempts are the least of his problems. What he learns about the skraylings and their unholy powers could cost England her new ally—and Mal his soul.” 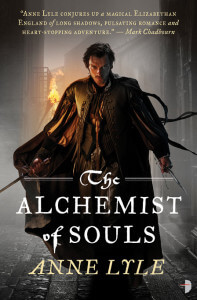 Lyle balances the fictional and the actual historical details with such precision thanks to detailed research, The Alchemist of Souls easily convinces you the Virgin Queen has produced two heirs and that the Age of Exploration has gone ahead of its regular schedule. As a world-builder, I did love how the theatre culture and political intrigues received such a well-nuanced treatment that wove the bigger plots tighter together.

The Internet abounds with reviews that praise Lyle for the obvious elements – story, characters, atmosphere and realism – but I’m a bit disappointed reviewers have avoided the discussion of the characters’ sexuality in The Alchemist of Souls, because the strong representation of alternative sexuality in different degrees raised big, sequined red flags in my mind. Once I read the morning-after scene between Mal and Ned right as the story picked up pace, I followed the romantic sub-plots* closer than I did the plot lines pertaining to the actual story resolution.

Somehow, every time I sit down to read any piece of work I seek out the sexy parts. It could be just general cheeky behavior, sex or intimacy; I have to know. Perhaps this says something about me as a reader, but I’m well interested as to how fiction writers treat the subject, because genre-wise, speculative fiction has the most freedom to have a dialogue about sexuality in a way that’s unburdened by convention or expectations. Alternative history (when done right as is the case) is in the interesting position, where it can educate on the sexuality of the past as well as tweak with it, both functions The Alchemist of Souls has fulfilled.

The Alchemist of Souls doesn’t shy away from homosexuality. Mal and Ned seem to practice the modern friends with benefits relationship, while Ned has a steady lover in the face of Gabriel, a theatre actor, who plays female roles. At the same time, Mal and the Skrayling ambassador share a bond that transcends physical sensuality, but stays well within the realm of intimacy that has a lot to do with a fine sub-plot I won’t discuss (spoilers and all). Then, Hendricks’ obvious crush on Mal isn’t used against the character (Jacob Hendricks fills in the shoes of the novel’s resident spunky girl, a character I adore and that remains in male drag during the novel), so there are a lot of surprises that could catch a reader off-guard, considering the story takes place in Elizabethan times with a million and one misconceptions about the period.

Lyle explains the homosexuality in her book in an informative post on her blog “Homosexuality in Elizabethan England”, from which those unfamiliar with the subject can get acquainted with a rather less prudish England with a different understanding of behavioral rules ascribed to different genders. I won’t go into details as to what she says in her post, but will summarize by saying that demonstration of physical affections in public between men wasn’t out of place at the time and that orientation had a certain sense of fluidity. This information warrants the non-sensational treatment gays have received in the book. These moments come as a matter-of-fact and there is not a lot of fuss made, which I found to be quite refreshing to read.

Another interesting moment in The Alchemist of Souls has to be the cross-dressers and how they are fit in the big commentary of the world. Considering Lyle has written an espionage story with an emphasis on mystery, it comes as no surprise certain people aren’t who they appear to be. Case in point, Jacob Hendricks, who’s found that dressing as a boy has helped her survive in the world. Cross dressers remain as a fixed presence in the novel in the face of the theatre actors, who have boys perform female roles as per ancient tradition. They’re paid for their work and accepted by society. They aren’t pressured into the practice and can easily slip out of the other gender’s attire. That’s not the case with Jacobs, though.

For Hendricks, cross-dressing has become a survival mechanism. For her, there’s no option but to remain a boy, until she has a chance to settle down without suffering a sad fate as a prostitute. So the moment she develops feelings for Mal, Hendricks struggles with maintaining her persona as a pre-pubescent teen. Lyle harvests this inner-character conflict and feeds the story with the ‘impossible love’, which might seem cliche on paper, but has become fresh in Lyle’s Hands. Opposing to this strained character development is the Skrayling version of the cross dressing practice. The Skrayling ambassador alternates his appearance as to better serve his role through the removal of his fangs (a male secondary sexual characteristic) that allows him to speak different languages and he generally looks different than the male Skraylings the cast comes across.

Although the ambassador doesn’t come across as a female, nor does he identifies as such, he can speak fluent English, something Skraylings seem to refuse and resort to the rougher Tradetalk, because male Skraylings find a number of letters in the English alphabet to be effeminate. I have added a small snippet from the book to illustrate my point. This is a conversation between Mal and Jacob, the latter of whom has been teaching the former Tradetalk:

“Well, the first thing you need to know,” he said, staring off into the distance, “is that Tradetalk uses English words, more or less, but not in the way an Englishman would do. The skraylings refuse to make certain letters, to whit, m, b and p–”
“Why?”
“It is said they find them effeminate, like a lisp. The upshot is, they must find new words for many common English things, such as mother, brother and the like.”

Therefore, the ambassador’s willingness to use the alphabet with its full roster of letters translates as to his willingness to adopt some feminine qualities in the name of his calling. Perhaps I read a bit too much into a subtle moment, but Lyle has created a culture that seems to be much more relaxed as to how far it takes gender conventions into consideration. This, in turn, will probably place the Skrayling culture in direct opposition to established European ones during this time period, leading to an interesting commentary on our society at the time, something Anne Lyle has been doing all the while.

—
* I have notified Anne that her novel has received Harry’s Seal of Approval for her Outstanding Depiction of Romance. For once, a novel doesn’t suffer from an unbearably annoying love story. A common short coming in the genre.