In March, when the idea for Women in Genre first took place, I instinctually thought about all the authors I could feature, highlight and praise, because most threads surrounding the discussion about genre in genre fiction touched upon authors. Nevertheless, authors don’t exist in a vacuum. For every author out on the shelves stands at least a hundred fans and genre professionals who’ve contributed to said author’s release. It’s reasonable to assume a portion (sometimes larger than the half, others smaller) consists of women. 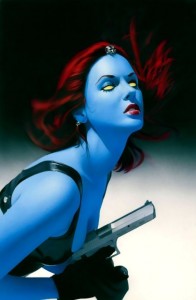 Reviewers (as in online reviewers with a blog and for-the-love approach) often remain invisible, because there are so many of us out there. Also, we tend to hop around, change venues. Just look at me. I’ve changed approximately five personal blogs before I finally settled down. It’s common for review blogs to sprout, wither and die – all within a year. Names come and go, but one name has remained a constant fixture in the reviewing circle and that’s Theresa (known as SQT) over at Fantasy & SciFi Lovin’ Reviews.

It’s incredibly fun to see a blog as old as hers (I can only think of Larry Nolen’s OF Blog of the Fallen, which is older) stand the test of time and continue creating content worth reading. Part of her appeal lies within the variety – TV news and reviews, movie trailers, movie commentary as well as book reviews, cover reveals and updates on release dates. Also, Theresa enjoys constant make-overs, which make for interesting visits when you’re used to one layout and then land on a completely different design. Only Carrie Cuinn manages to pull it off better.

What’s so special about SQT to feature her in Women in Genre? I’m sure you’ve already asked, because all 30 women have something to do with my life beyond being their good work and their dedication to genre.

Put on your roller blades, cause I’m pushing you downhill for a speedy trip through memory lane to a time when I thought being a fantasy reviewer was the best thing to have happened to me. In retrospect, I agree genre reviewing (even on my shitty Blogger blog) turned out to be best thing to have happened to me. I needed something like this to help me through the lowest points in my young adult life – namely the ugly deterioration of my parents’ marriage and subsequent divorce. Divorce whether the right or the wrong decision brings a shitload of stress, feelings and a change in status quo. As a teenager, I needed the lifeline.

Reviewing did it for me and SQT helped me set up, gave me pointers and sent me books, which I still appreciate it. Basically, a woman with no connection to this foreign kid sent books over the ocean so that he could read and review them for her blog, which doesn’t really bring big bucks. I didn’t have access to any genre literature in English, because shipping is expensive and the only translations available were of epic fantasy – a genre I’ve outgrown (to be fair, I don’t have the memory capacity to keep up with book book series).

You can’t really forget the person who has given you books at a time, you couldn’t afford to get on your own. For that, Theresa (or SQT as I’ve always called her) will forever remain as one of the most important women in genre to me.