Pose: The Surprise Reader does not pertain to a standardized body position during the act of reading itself. Instead, it denotes the unusual location within which a Book Keeper has been discovered to enjoy a book. These locations are often considered to be ill-equipped to serve as reading spaces – coat racks, kitchens, basements and filing cabinets among many others. Even though the Surprise Reader relies on the element of discovery by someone else, most Book Keepers have been observed to read sitting when pulling a Surprise Reader.

Purpose: Originally, the Surprise Reader served no greater purpose by design. However, the pose has evolved to label a certain behavior – eavesdropping. Book Keepers understood how to utilize the eccentric reading behavior as a tool of espionage. By blending with surroundings and maintaining a low profile by pretending to read, Book Keepers can become the perfect spies – silent and easily ignored.

With the conclusion of modern colonization of the Infinite Shelves, the Surprise Reader has suffered criticism. It is therefore a frowned-upon activity and a show of bad manner. 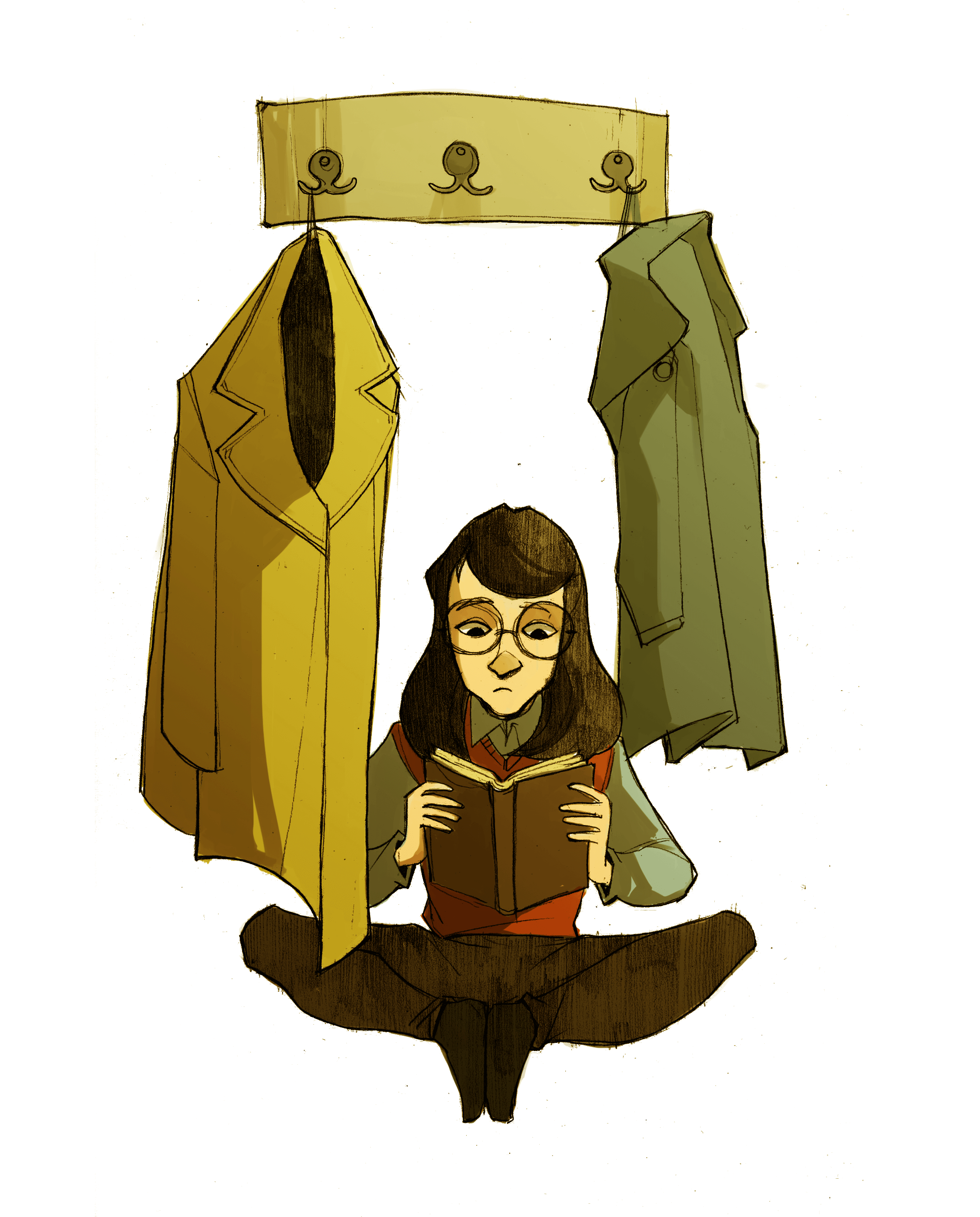 The Surprise Reader by Diana Naneva

As expected, West Central’s seedier spots cater to rumor and exchange of information.

No one expects for the Infinite Shelves to welcome delinquents, convicts and a whole slew of dangerous individuals, but not everyone within this world has a peaceful origin story. And in times when the balance of power and peace finds itself at stake, the Hades caverns provide a much needed window into West Central’s underbelly.

Lyra nervously flickers through a copy of a witch’s diary, which is written in ink that has a suspicious red color and smells of colon. The pretense to be on a search for something riskier than her usual fare has bought her enough time to pull a Surprise Reader on the Keepers who socialize in the dimly lit caves where dangerous books stack on top of each other as if the Infinite Shelves want to warn people about what lies within these covers.

Lyra counts her breaths and after a sufficient number thinks it safe to leaf through the small booklet. The long dusty coats on either side of her have kept her out of sight from the patrons in this makeshift book station, her own coat folded over her right elbow as if she’s ready to go herself with the book in question. She has to be convincing, even though the past two hours have been devoted to listening to the general chit-chat across the tables and rows of books.

Her heart speeds up every time the page flips and in her head, the rustle sounds louder than anything else in the world. But the conversations flow into each other, shop talk not unlike the one heard everywhere else in the Central, crude humor and stories before the Infinite Shelves. Yet, the air weighs down upon her with tension and expectations of a brawl – a popular rumor concerning the people dealing with dangerous volumes. So far, the Southern Central hasn’t come up among the patrons, but that soon changed.

“Did ya see the look of those Southerners? Bad news I tell ya. Bad news.” Lyra dares not show a reaction, even though relief and excitement course through her whole body. The man talking is tall humanoid with a bald head, but with his back to her, Lyra can’t say for sure the race he belongs to. Could be human, but his voice trails with a crackle that suggests otherwise – just what she needs. A lead with no face.

“What they do is their own business,” a woman sitting across the man replies. She’s human but her features’ proportions deviate from what Lyra has seen her whole life in her version of Earth, so perhaps the woman belongs to an Earth where human DNA has followed a different evolutionary path. “No one has jurisdiction over their territory but themselves.”

“Oh yes, now it’s their business still. But as soon as they bring fire into the game, it will become everyone’s problem.” The man speaks again and as he talks he sways to the rhythm of his voice, hands trailing words in the air with thin, bony fingers and nails that look designed for the purpose of performing lobotomy.

“No one is stupid enough to bring fire here.” The woman shakes her head with a hint of laugher in her statement. “Everything here is made of paper. One match can end the Shelves. Who in their right mind would even think about setting fire.”

“The southerners are. I have it on good authority the Southern Central is looking to purge the Shelves. Scale things down.”

Chima and Atticus have to know. They just have to. Careless who sees her storm off, she jumps up to her feet, the diary discarded as she makes her way out of the caverns and into the sunny paths of the West Central.