[Women in Genre, Day 15] Diana Pho and the Clockwork Thought

I can’t discuss my influences without mentioning Diana Pho (or Ay-leen the Peacemaker), who runs the excellent blog project Beyond Victoriana – a wonderful blog dedicated to steampunk in its non-Western incarnations. Multiculturalism in genre has picked up the pace in the last couple of years, but Diana has been leading a similar discussion within the boundaries of the steampunk sub-genre and movement, which to a point has been associated more with cosplay and a sense of artistry rather than a set literary tradition. 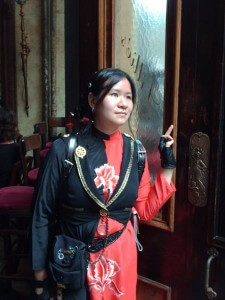 What Diana Pho succeeds at is to take the conversation about multiculturalism to a new depth by drawing on history as a context to explore the genre within. History buffs will find the content on her site to be incredibly addictive, because it treats a sub-genre with a reputation of being light as an experience and ground it within a very real background. It’s certainly interesting to see how a seemingly restricted in scope setting (Victorian times with steam technology superior than what the world had a time) can spread a cultural movement, which has manifested off and on page.

Diana Pho is one incredibly intelligent and well-read woman, which makes any discussion with her on an intellectual topic highly stimulating. I have to list her as one of the big influences in my creative life, because if it wasn’t for her and her call for contributors, I wouldn’t have known I’d had it in me to write a serious essay, which at the time was a huge departure from what I did and still do – review books. No, what I did for Beyond Victoriana in 2010 was arm myself with a pen and notebook, a reading list and set out to find out whether Jules Verne did father steampunk or not. The answer is yes and no – yes, he did it as the aesthetic of his work translated well into the current understanding of steampunk, but also no, because from a historical standpoint he wrote science fiction.

I had a question, my own assumptions, Verne’s novels and the Internet at my disposal to build a case, which I did. I loved the experience, which I can only liken to being a book detective on the hunt for revelations (hidden in between the lines). It’s one of the best ways to learn, because you want to know the answer and can stumble upon pure gems by accident while on your search. The essay I wrote had to be split in two – one part concerning steampunk’s lineage and another that dealt with the archetype for steampunk characters. I’m proud with both pieces and consider them to be a milestone for me as a writer. After all, I leveled up and learned I could very much be an investigative thinker (it’s my blog; I make up the fancy, nonsensical titles) in addition to being a reviewer.

However, I couldn’t have done this without Diana and her guidance. When I hit a dead end with my approach, she would be there to ask questions, lead a discussion and lead me into a direction I wouldn’t have otherwise taken. It’s certainly something no one has ever managed to do for me – I mean give me the time of day (heck, I’m paying for a university education and the professors don’t want to bother). So, I thank Diana Pho. You have been a valuable teacher in my life.