[Women in Genre, Day 13] Jaym Gates – The Queen of Deadlines

It’s Saturday, the first day in two weeks, I have had some free time to rest, catch up on TV series and even read. Having almost to no free time has become feature presentation in my life. When I think my schedule has grown too overpopulated, I look over at Jaym Gates, Queen of Deadlines, Slayer of Schedules. Gates is perhaps the most industrious woman in genre I’ve met and she has contributed a lot to the whole US scene. I certainly can’t imagine what genre would be without her being involved in it. 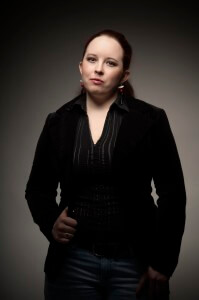 I really have to thank Twitter, because I think I initially came to know her awesomeness through there. Being fabulous as she is, it was easy to transfer the chemistry to Gmail Chat and Facebook and I had the best of times to hear her threaten the world and fabric of reality with complete and utter annihilation. And you know what? She can follow up on her threats, cause she drinks coffee brewed in hell. That’s how hardcore she is.

I find it hard not to admire her deeply for her inner strength, drive and perseverance to do what is in her heart. Seriously, we need PSAs on her work ethic, because she works harder than anyone I have ever seen. Gates is the publicist you want to represent you. There’s nothing she won’t do to get her job done. I can tell, because I have worked with her as an assistant on a few projects and have learned a lot about taking up responsibility and following through your promises. The most valuable lesson I have learned from her is to know what to promise and whether you can deliver. Naturally, she can deliver it all.

Kill mountain trolls with battle axes? She’s game. Exorcise an army of Furby dolls? She has the scripture. She does work for big organizations and small presses as well as individual clients and tends to travel a lot to where the authors are (cons) and talk shop. It’s the nature of our culture to focus on the shiny covers and the people with their name on the books. The people involved with the process of book creation and its announcement to the world remain often unseen, because we pay more attention to the message rather than the messenger.

Gates brought the world ‘Rigor Amortis’ – the first zombie erotica anthology, which I thought to stride the line between titillation and artful disgust superbly. It’s one of those weird projects that adds flavor and a touch of eccentricity to an otherwise very streamlined genre-family, which has fallen into heavy reliance on tropes and story archetypes. ‘Rigor Amortis’ challenged readers and their tastes and brought fun to the reader (as well as smut and somehow almost made necrophilia an OK thing within the context of the zombie apocalypse).

How can you top that? Easily, attach yourself to one the most successful Kickstarter campaigns for a book, duh. Jaym involved herself with the amazing ‘Geek Love’ (in which I have a story) and it’s easy to see why. Geeks love sex and smut, so an erotica anthology tailored specifically to a geek demographic filled up a much necessary void. ‘Geek Love’ is one of the most beautifully crafted book I have ever seen and Jaym has been hard at work popularizing it.

Jaym has shown me that you can do everything you want (sure you will be underslept a lot, but it can be done), if you really want it and are prepared to work for it. She’s been a role model to me as to what a really strong person is and I really have to thank her for that.