When the Harmon family moved into their new home in Los Angeles that would then turn out to be called the Murder House back in 2011, American Horror Story achieved something truly unprecedented on the small screen – it created electrifying, daring and ambitious horror that spared no character. Yes, in pure Ryan Murphy fashion the show was messy, uneven and far exceeded its reach on occasion, but what it succeeded in doing was prove horror worked as an extended narrative beyond the feature film format, which had grown stale and predictable. It proved that if you gave your characters enough time and rope, they’d hang themselves and do so in profound and unsettling ways. 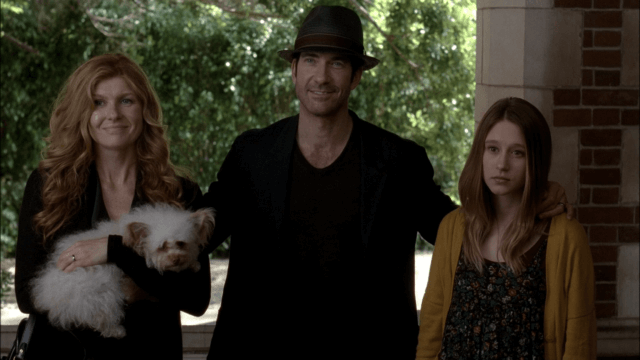 Although imperfect Murder House stands ambitious, gorgeous and dangerous. The first outing for Murphy into horror remains sadly the best as the series’ overall quality dropped faster than a gunned-down fighter jet during WWII with each succession in the franchise. Asylum gorged itself on storylines, characters and themes to last a series, Coven fell apart under its many inconsistencies, Freak Show suffered from character overpopulation (with incomprehensible arcs) and Hotel titillated and brazenly masturbated with a horror aesthetic that reminded me of an Evanescence music video. This downwards spiral lands us at Roanoke; AHS’s sixth season that curiously brought the show to its beginnings as a new family moved into a new house and fought the souls trapped inside.

Given that all seasons take place in the same universe and the metaphysical rules remain very much unchanged, I’ll discuss the horror – in truth the mismanagement of horror – in Roanoke in comparison to Murder House. Spoilers are imminent. I hate-watched it, because I wanted to see how bad Murphy could get at telling a story and through watching it, I came to meditate on the nature of horror as a genre.

Seeing someone doing everything wrong is weirdly cathartic. So here we are… about to embark on a hateful journey. Buckle up, kiddies, bile’s flying EVERY – GODDAMN – WHERE. (Needless to say; spoilers ahead.)

The very reason I found Roanoke interesting as I sat down for my annual tradition of seeing the first three episodes of the new AHS season before deciding to continue watching it or not is the reason Roanoke finds itself dead on arrival. I’m talking about the season’s conception as a low-budget reality show filled with reenactments and voiceover from the Miller family, describing their paranormal survival story. Interesting as this idea might first appear, it falls in direct opposition of horror’s first and most crucial covenant – uncertainty. To elicit horror or even the slightest disquiet and worry, the work in question has to leave the characters’ fate up in the air. The uncertainty surrounding a character’s survival chance is what creates tension – the core emotional tether that should be pulled taught to carry over the reader from the start of a horror movie/show/novel to its very end. If there ever was a necessity for the viewer to not flinch away even for one second, it’s here.

You tell her, Viv. Also, remember when characters sounded like real people on this show?

Murder House achieves this with relative ease, cause as a season it plays with well-established tropes and knows what’s expected of it. Murphy here understands how pacing should work in amplifying tension. He values restraint to give the characters – and in turn, the viewer – a real taste of hope as the Harmon family fights against their home’s advances to assimilate them in its ranks of trapped souls. Until the very end, there’s the possibility for someone to assume the role of the survivor – and the reason Murder House was so transgressive is the first place is because the Harmon family’s demise was complete and therein lied their redemption, because the season’s backbone storyline revolved around how fractured and dysfunctional they were. In fact, this was the reason for their move. To start again.

Roanoke follows a similar trajectory – Shelby and Matt Miller move into a colonial farmhouse to recover from Shelby miscarriage after the couple’s assaulted in Los Angeles. However, the crucial difference here is that this core moment, catalyst and seed is soon forgotten. Murphy has no intention to examine psychology or maintain thematic cohesion. Instead the focal point becomes the reality show conceit – a rapid interchange of reenactments and testimonials that signify from episode one that no one dies. From the first episode, the viewer is shown that no one has been harmed. There’s no real danger for any main character. The first covenant has been broken.

Even when Roanoke concluded the reality show framing in its mid-season and had the chance (not to mention the moral duty) to throw all sense of security out the window with the rather dull idea to produce a second reality show, it didn’t take it. Murphy here is committed to have a blood orgy. All the original survivors come back to the same farmhouse alongside the actors playing them in the reenactment scenes. This happens during the blood moon when ghosts are most dangerous and of course, the show dramatically announces that only one person survives the events that take place. Murphy has abandoned all subtlety and restraint in favor of murder, gore and death in his full misunderstanding of what makes horror so potent in its ability to terrify. 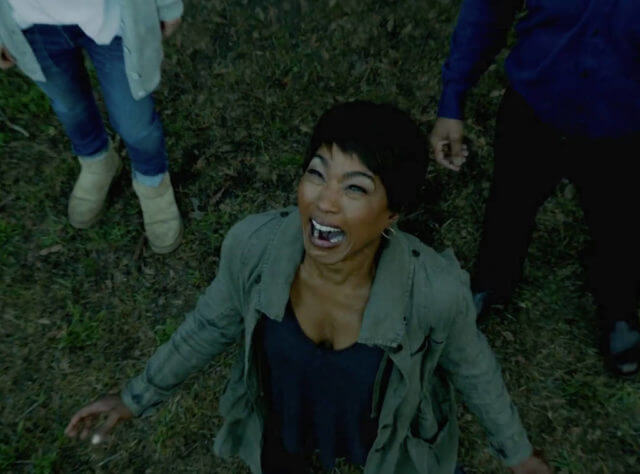 There’s a lot of this going on, though. Incidentally, this is the viewer praying for mercy.

It also doesn’t help that the show’s shot horrendously. You have the worst of reality television camera angles, shaky cam (with lots of night-vision green) and truly horrendous, disorienting editing. In just one minute, we have 10 fast cuts and the median shot length stands at roughly 5 seconds. You have 5 seconds for your eyes to adjust to the placement of actors and props. Then everything is yanked from right underneath your feet and there’s no logic or elegance to how the footage is edited together. By the time, the viewer gets their bearings, there’s another cut and a different angle. What further hurts the eye is the haphazard choice in footage quality – static HD switches to phone cam switches to Go-Pro switches to handheld camcorder.

Me. All the time through this goddamn season.

Gone are the steady shots of Murder House, where Murphy actually cared about immersing viewers, evoking dread and building suspense. The editing in Murder House, even if fast cuts are employed, is smart in steering the viewer’s focus. This isn’t anything special. It’s the most basic prerequisite to make any video watchable. Somehow Murphy doesn’t care and Roanoke becomes as unwatchable as any of the Transformer movies.

Back to the story and the annoying spoiler. Knowing every single principal character is going to die but the exception of one leaves little for the viewer to invest in apart from guessing the order of deaths and placing bets on who’s going to be lucky final, final, pinky-swear survivor. This could have been fun had consistent, steady character development been a priority… But Ryan Murphy doesn’t care about character and fucks this up spectacularly in Roanoke.

There’s a reason why most horror properties center on a small groups assaulted by the unholy – young couples caught unawares, a family terrorized in their own home, a core friend clique whose youthful thrill-seeking invites hauntings, slashers and monsters. The story needs time in establishing baseline characteristics – attributes, dreams, troubles, fears and predispositions – to invest in their eventual survival once shit goes down. Viewers need to see these people as human. Sympathize with them, if not identify. This is done in order to fear for them. Tension runs higher. Dread intensifies, when the viewer cares for the people in jeopardy.

Murder House knows this. The core characters are six overall and the first episodes work to establish only the Harmon family – who they are, what burdens them in life and what each one’s battling and fighting to gain. Only afterwards, does Murphy allow the space to develop the other major players who will shape the narrative. This he does over the course of twelve episodes in total.

Let’s compare the situation to Roanoke. There are ten characters, and it’s very important to note that three of them spend half the season playing the Millers in reenactments, so we can’t talk about any real character development here. The Millers themselves are shown through confessionals and voiceover – static and expository, while their physicality is merely a performance for the reality show. There’s a disconnect between body and personality. There are no real people in the show for half the season and horror does not grow where artifice is. It needs honesty, truth and vulnerability; things we actually get once the actors and the Millers are brought together in the farmhouse, but by then it’s too late.*

We’re in the middle of a story that’s regurgitating itself – a callback to Groundhog’s Day with none of the ambition for profound realizations about life and self. There’s not one moment of surprise. Not even the jump scares can raise your pulse. We don’t know the characters, so we don’t really care what happens to them. They’re nothing but mutilated corpses in waiting for Murphy to thrust and impale them to their deaths – and you can be certain so many deaths are phallic in nature.

There’s only the blood. The motions of horror without any of the meaning. American Horror Story: Roanoke, in making itself about the artifice of reality television, becomes artifice itself – a hollow, dull affair. Horror without fear.

—
* – This, by the way, applies for the minor cast as well. The numbers grow and Murphy is so fascinated in building his own shared universe and referencing his past seasons, that he does not care to even integrate their stories all that well. All the tangents about past victims of the farmhouse feel at best tacked-on, at worst, irrelevant and grating as they disrupt the pacing.