[Women in Genre, Day 1] J.K. Rowling and The Dawn of the Reader

Day one, everyone. Here is my first story about women in genre. J.K. Rowling’s name has been thrown in more than one conversation, because she has effectively shaped a whole generation and coincidentally, it was Rowling who got me into reading books for pleasure and taught me how to appreciate the written word. Rewind the tape, please.

As a kid of the 90s, I grew up with an unconditional love for my television set. Cartoon Network had invaded my life since I was six year old and has stayed there. Then came RTLII with German-dubbed anime and Fox Kids with the X-Men. Heaven had set up camp in my living room and I’d no intention to fall from grace any time soon. 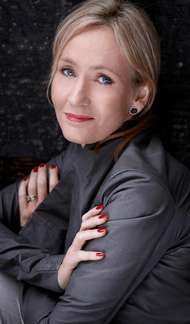 Books, at that time, perplexed me as they had no pictures, demanded attention and lacked fun the way I understood fun from animations. Plus, from what I’d seen in my mother’s personal library, books told stories about ordinary people in the real world. It didn’t help that teachers expected summer reading and reading journals with tens of questions about books I didn’t like at all.

Here I have to give it to my mother who adores books and sought to introduce me to books properly. I clearly remember the afternoon she brought home “Harry Potter and the Philosopher’s Stone”. I had homework to do and the weather was gray, but I hadn’t yet turned on the lights so the beaten-up table swam in twilight when mother placed the book in front of me. I should mention that this happened during the years post the hyperinflation in Bulgaria in 1997 – the worst Bulgaria’s had, if I’m to believe what people have told me.

No one had money. Food prices skyrocketed and what was worse, food was pretty scarce. So for my mom to have bought a book, especially with my sister a toddler, now that was something really special. That’s parenting done right in my opinion.

In retrospect, I believe the experience of setting eyes on the cover resembled the sudden change from black and white to full color in The Wizard of Oz. Magic! Here is this dorky boy (Harry’s a bit of a spaz on that first cover) my age (I was right around 12 years old, when Harry was told he was a wizard) with a wand (I was crazy about magic items) and my name (although I am Haralambi, everyone calls me Harry). It’s so uncanny, I used to think Rowling had dreamt my life and got the inspiration from there.

I devoured the book the way a boy who has never read for pleasure could – in small chunks until words would swim and I had to take a break, but I absolutely loved the feeling. I still get that feeling, a bubble that fills up with emotion and overcomes me body and soul. Rowling’s worldbuilding allowed absolute freedom. Everything could be magical and it’s this freedom most cartoons about magic lacked as they relied on a small, focused concept reduced to a magic item with a strict number of skills.

My mind was blown. Blown, I tell you, but in a constructive manner, because I could see well beyond the limitations I had about creativity and imagination.

It also brought a lot more personal freedom as I was a shy kid and hated how crowded my house would grow when everyone would gather at the same time in one room. Sometimes, I had to go through hard negotiation talks to reach the TV set, but with a book, I only had to find a comfortable spot.

This is what J.K. Rowling gave me – imagination, freedom and a burning passion to find books with magic (I still had to learn that fantasy and science fiction were long, established traditions). It was the first time I ever felt I had something special and intimate going for me and for a sad (I think I carried a deep-rooted melancholia even then), introverted child, this realization kept me all warm inside.