Last night during my all-nighter as I was chasing down a wild deadline, I found myself tweeting in the early hours of the morning (Bulgarian time) and encountered this tweet by author Kelly Link*:

Looking up drinks you make w/ cloudberry liquor. There is a drink called Kitten Cuddler, but we do not have creme de banane. So: Golden Sip.

Maybe it was the sleep deprivation, but I really started thinking about why a cocktail would be named the Kitten Cuddler (pretty random name). My brain was trying to find a correlation between kitten fur and banana crème. Anyway, somehow the conversation led to this tweet:

@HaralambiMarkov why not the Octopus Cuddler? i would try that.

Which very well should be a cocktail. I strongly believed this, so I responded with this:

@haszombiesinit Give me a day and I will make you a drink recipe called just that. 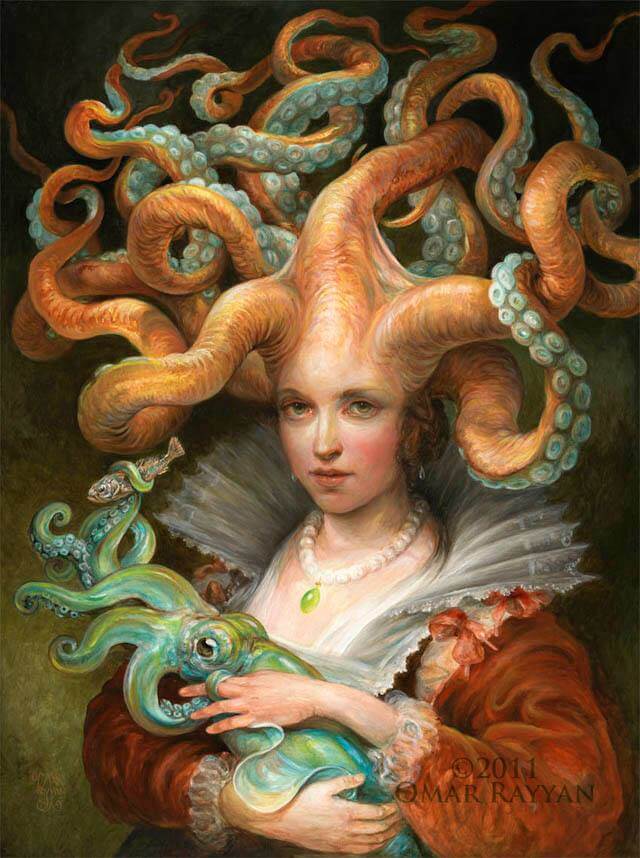 “Contessa with Squid” by Omar Rayyan

The first incarnation involved vodka, grenadine, blue curacao and blackcurrant juice (either that or cranberry juice), which I was pretty fond of, because I thought I had created the most delicious cocktail that was thick and looked like ink – purple grey!

Thankfully, my roommate used to be a bartender for the better part of a decade and pointed out that milk and an acidic juice don’t mix all too well. As I had initially warned on Twitter, my mixing techniques would probably kill someone or at least cause some major cramps.

With his sage advice, here is how the TRUE Octopus Cuddler was born.

Ingredients:
1 oz. Midori – It’s bright-green (a color we need) and super sweet as it’s melon-flavored.
1 oz. Sambuca – It comes in a variety of colors, but we need it white transparent. Now this is the alcohol that compliments the Midori’s flavor and add a bit more of a punch with its anise flavor.
½ tsp Grenadine – Mainly we’re using this because we need the red dye, but the sweet-tart taste certainly contributes in a positive way.
Cranberry Juice – I’ll leave the exact amount be your call, depending how strong you want the cocktail to be. I personally would go with 2 oz. because I don’t want to water it too much.

Preparation:
It’s pretty simple. Add everything into a shaker or anything else that can double as one and shake stir until everything blends nicely.

The end result should be a thick, syrupy ink-colored drink, which should technically be sweet enough to put you in a sugar comma. Depending on how you much cranberry juice you add the color and consistency will change, but in general the Octopus Cuddler should be both inky (because octopuses don’t react well to hugs) and sweet (because cuddles are cute).

This how to make Kelly Link’s Octopus Cuddler.

Unfortunately, I’m piss poor at the moment and cannot afford half of the ingredients so I can’t make it myself just yet, but this recipe has been approved by an experienced bartender who knows his stuff, so it’s perfectly safe.

Octopuses are dangerous that way. You should live with the risk!

PS: On an unrelated note, please stay tuned. I will publish my review of Angela Slatter’s “The Jacaranda Wife” by the end of the day!

—
* It feels weird referring to Kelly Link as author, because who doesn’t know who the fuck Kelly Link is, but at the same time I can’t say that I personally know her, so it just feels appropriate to include the title. Though author doesn’t really fully capture Kelly Link. Anyway, I’m digressing…