I can’t celebrate Women in Genre without Lauren Beukes – a true powerhouse from South Africa with experience as a journalist in some of the most dangerous cities in the world. I first heard of Beukes through Angry Robot, who published Beukes’ “Moxyland” as one of their first titles and have since published her second novel “Zoo City”. In both novels Beukes proves her an insanely talented storyteller with edge and a gift to include social critique in her genre. 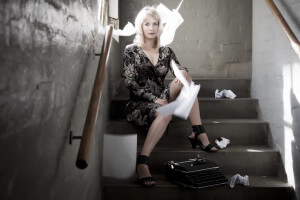 Oddly, I didn’t fall in love with Beukes with “Moxyland”, though to be fair I’m don’t read sci-fi enough to appreciate all the novel had to offer. I took issue with the execution rather than what it said about our society and its potential evolution in the near future. Beukes creates a very bleak, painfully realistic rendition of a society in worship of brands – a frightful, possible outcome from the aggressive branding big corporations have embarked on. The events in “Moxyland” hint as to the eventual devaluation of human life. It’s scary to think, let alone read it, but faulty pacing and vacant characters prevented the novel from becoming a true landmark. In short, it wasn’t raw and it needed to be.

I wasn’t quite sure whether I’d read Beukes again, until I read “Zoo City” – an urban fantasy tale I hoped someone would write. In short, Beukes slayed the story. It’s what urban fantasy needs as a genre and Lauren Beukes seized the genre potential to bring forth a living, breathing portrait of South Africa in her portrayal of Johannesburg as a dangerous and unforgiving place. Even in her first novel, “Moxyland”, I hailed Beukes as an author capable of bringing cities to life and urban fantasy needs its urban settings to rise as entities. Beukes prose excels at this task and the results are incredible.

On my way home, the dull crackle of automatic gunfire, like microwave popcorn, inspires me and a bunch of other sensible pedestrians to duck into the nearby Palisades shopping arcade for cover.

It’s fascinating to see an artist grow and “Zoo City” showed comprehensive growth in directions I didn’t even consider. Worldbuilding, prose, rawness and social commentary complement each other in a story not meant for those with weak hearts, because blood stains mark the dark corners of Johannesburg and people take off their skin to reveal their inner monsters in a slow, magnetic striptease you can’t look away from. Let’s not forget how “Zoo City” reflects upon a very dark and still painful chapter in South African history – the apartheid and does so with respect, care and realism.

Naturally, I have now preordered “The Shinning Girls” – Beukes’ third novel, soon to hit shelves and hope to read her comic book series for Vertigo “Fairest”, which is a spin-off of “Fables”, my most favorite running comic book series. If my theory is true, Beukes can only evolve as a writer and improve her craft; something I’m absolutely certain I want to be a witness of.

I think it’s pretty obvious as to why I celebrate Lauren Beukes. She has all the qualities I want in the authors I’m reading – style, raw emotional core, social commentary and rich imagination. I can only hope she writes dozens upon dozens of novels.