[Women in Genre, Day 18] Karin Tidbeck and on Expanding Horizons

I’ve already mentioned Karin Tidbeck a few times in my posts so far, but I haven’t talked of her work at length. Tidbeck may be a newcomer to mainstream genre (if anyone is unaware, Tidbeck has been publishing short stories for years, but it was her collection “Jagannath” to launch her in the eye of the public), but it’s exactly her ‘birth’ what’s exciting. I feel that electrifying feeling I am at the right place and the right place, watching something magnificent come into being even though signs have pointed towards it for those looking. 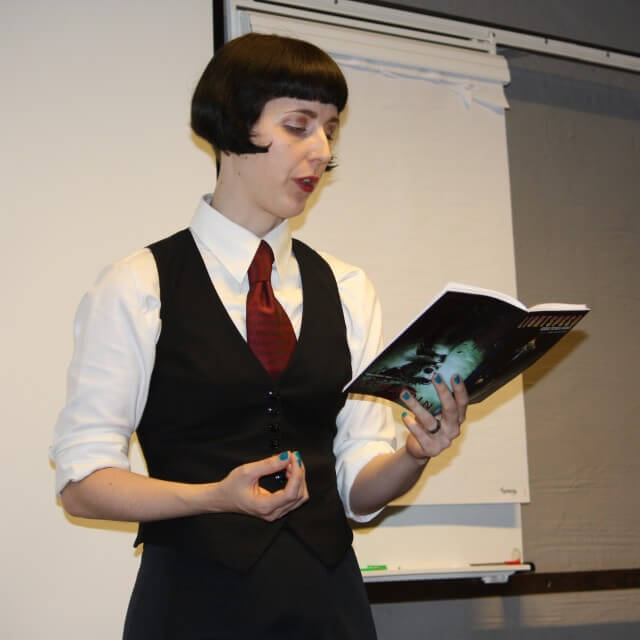 Tidbeck isn’t a new author in the sense she has yet to master her craft. No, writing is what she is meant to be doing and does so without effort. As with most non-US authors, Karin Tidbeck has been creating for years in Sweden before translating her works into English and publishing story after story in magazines such as Weird Tales (under Ann VanderMeer), leading to “Jagannath”. I find this process fascinating, because I adore short fiction and I tend to view collections as a big, bold picture with broad strokes. View the picture stroke by stroke and you can track it from its inception to its publication and there’s never been a more magnetic release such as “Jagannath”.

Huge props have to go to Tidbeck’s publishers (the VanderMeers) for the hype they rose around the release and made “Jagannath” the book I anticipated the most in a long time. I think I assume correctly by saying anticipating a book’s release brings a certain kind of joy young lovers feel in most romance novels. Considering how intense this year has shaped up to be, I’m grateful for the pleasant distraction of waiting for a worthwhile book and Tidbeck’s “Jagannath” is deserving of it. I fell in love so deep, I’m well beyond articulation. Nevertheless, this is what I had to say of her stories:

“Off-kilter. As Hedvig in “Reindeer Mountain” described Märet as “touched” I can honestly say this definition applies to Karin Tidbeck’s stories, which spin unsettling shadows from the fringes of folklore into narratives that scream in their silent, frost-fresh grotesque beauty. Reading Tidback is like shooting flares in the darkest recesses of my imagination and reminding me there is so much more to explore.”

Tidbeck weaves ideas and tropes unfamiliar to me into incredibly vivid and unnerving stories. In most cases, you feel the need to read them within a single breath and then take a pause to let all you’ve written wash over you. At the same time, Tidbeck clothes her stories in dark, soft-spoken madness and quiet absurdity. A zealous smile can chill more than any monster and Tidbeck goes for the details to tilt our world into a demented version of itself where things that shouldn’t be do exist and roam the forests. In their quietness, Tidbeck’s ominous 13 tales screamed louder in my imagination than any other collection I have read in a while – at least not in the same way.

I also very much hope the Sweden Tidbeck writes about actually exists, because it’s truly a place I would like to see and experience, especially the vittra and the pyret. In closing, Karin Tidbeck has made a splash in genre water, has brought much needed diversity in narrative choices, writes with a simple beauty and has so much more to give genre community. It’s pretty obvious why I had to honor her in Women in Genre month.