Pose: Simple and intuitive, the Reading Worm manifests itself in early childhood when eager readers consider discovering a book from a different vantage point. It’s an instinctual position that requires the Book Keeper to lie face down in front of the book, but the reader’s face must never hover directly above the text. The one requirement is for a Book Keeper to rest his chin on the ground in front of the text, creating a slanted reading angle.

Purpose: In the history of the Infinite Shelves, many reading poses have come and gone, but few have originated from a place of convenience and evolved on to become as instrumental in Book Keeper culture as the Reading Worm. The Infinite Shelves boast books that have books written inside their text – the so-called Veiled Tomes.

The Veiled Tomes are illuminated manuscripts where every letter is an illuminated initial or a sentence or word are woven together into an illustration. Reading a Veiled Tome is difficult at best, but when in the Reading Worm, the book reveals secret text hidden within the margins, illustrations and ornamentations on the page. Some tomes have been crafted so well, they can hide two additional, independent manuscripts within a single physical book.

Point of origin: As aforementioned, theReading Worm has been present within Book Keeper culture since the first wave to arrive in the Infinite Shelves. However, none consider the pose essential, therefore it took three centuries before the Reading Worm revealed its true potential. The discovery was made by a Book Keeper by the name of O-Ouaya, a member of the Ooyu – a serpentine race with soft skeletons whose lives are spent hanging upside down from the tree clusters in their home planet. 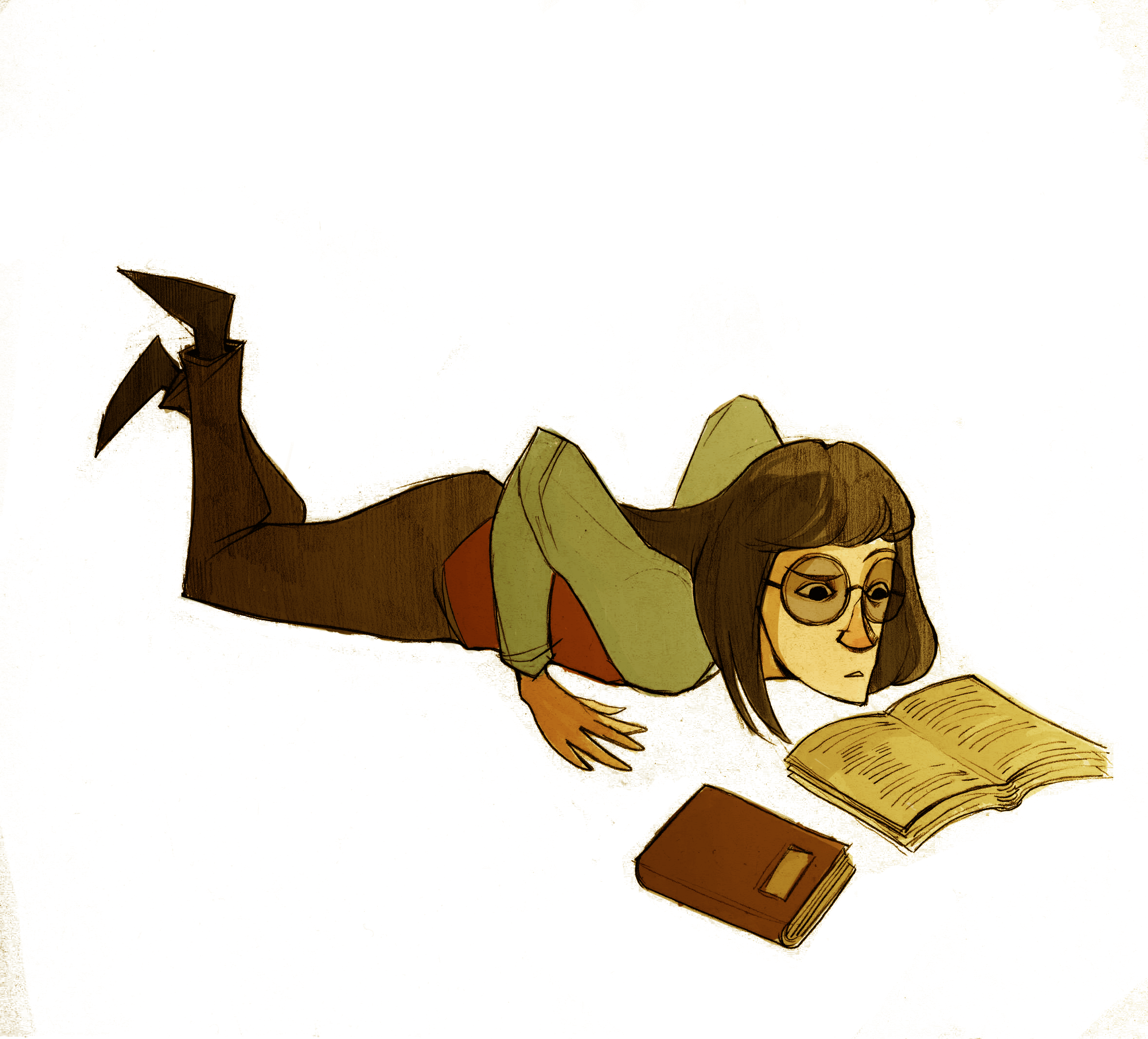 The Reading Worm by Diana Naneva

It’s because the Ooyu can read either hanging upside down or while lying on the ground that the Veiled Tomes were discovered in the first place. Since then, the Reading Worm has been integrated as a fundamental Sacred Reading Pose, while the technique of inscribing text upon text has been adopted by Book Keepers to compress information in fewer books of their own.

Lyra lies in the twilight of the bar’s sticky floor with the southerners’ books strewn around her. The clatter and excitement around her makes for difficult reading, especially when Chima dances around her and every step feels like playing the knife game with her spine. Nothing the southerners carried appears to be a Veiled Tome. Lyra turns the third book slowly clockwise on the large sheet of velum to see whether the slant in the letters coaxes a secret message out, but all she sees is the same sentences, now unintelligible.

“Another rum and blood mead,” the loudest guy at the bar shouts and Lyra almost tears at the edge of the book. Her breath catches and for several loud heartbeats she just focuses on her trembling hands. Why did I think this would be a good idea?

It makes sense for the disputes in the South, now a Civil War in the making, – no evidence suggests otherwise – to spread like a fire in a library and reach the West Central. Where there is strife, no one survives unscathed.

The papers Chima handed over mention a special collection, which the South Central has a stake in completing. What the books are about no one can say and the books these carriers are taking back offer no clue as to what that may be. There is a herbalism guide on the uses of a moss grown only inside the digestive tract of an earth dragon, a poetry book of nightmares as well as a book with illustrations of races from a world Lyra knows nothing about.

As with everything in the Infinite Shelves, nothing suggests these books can be connected in any capacity, but nothing to disprove an agenda behind selecting these particular titles to take back to the Southern Central. And yet, Lyra’s best tries yield no results. The books lack a hidden message, whether hidden in the illuminated initials and illustrations, nor planted in a fine Morse or Berengees code. No invisible ink. Not a single clue.

Fresh commotion rouses the bar as chairs drag and men stand to their feet. The evening is drawing to a close and if Lyra doesn’t hurry, the Book Keepers might wise up to the missing books.

“Ladies? Gentlemen? You’re going so early.” Chima gives Lyra a soft kick in her leg, the signal to gather up the books place them in their storage unit.

“Yes, I’m afraid late nights make for terrible journeys.” The person who replies is female, but carries no warmth. A woman who should not be denied.

“I understand, but it’s been so long since I’ve been in such lively company. Please do me the honor for one last drink.” Chima does her bartender dance where her hands part in a grand gesture and draw the attention to her specialty drinks. Pricy, enchanted, wish-fulfilling. “On the house.”

Lyra feels Chima’s heel dig deep into her thigh, a sure sign she’s losing the crowd. Swiftly, Lyra closes the books and stacks them the way she found them. The wrapping paper rests in the nook where she took the books from. It’s a quick affair. The paper wraps around without a crease, the cords tie into place and the books take their position behind the counter where a cool Chima picks them up and hands them back to the Book Keepers who in the end have fought off Chima’s hospitality.

It’s when a new group drags chairs into place when Lyra raises from the floor, dust stained and sticky.

“You have much to learn about bar work,” Chima says with a smile and a look that leaves Lyra without one.

“This isn’t over. I’m just getting started,” Lyra says, more to herself than anyone in particular, and slumps over the counter in exhaustion.